Over the last century, the fishing industry has changed dramatically, replacing the individual fisherman and his boat with a fleet of floating fish factories. The industrialisation of small and medium-sized enterprises has not only put fishermen out of work, but has also affected their social ecosystem. This change has been driven by increasing demand from wealthy economies around the world. Cristiana Cott Negoescus' work deals with this change and its consequences without pointing a finger at consumers, but tries to paint a picture of where food actually comes from and how it is processed. When it comes to seafood, we tend to consume highly processed foods that are not only unhealthy but also massively impact our environment through their production.

This work seeks to reveal the hidden tragedy in the farming of our food and the struggle of fish to escape their greatest predator: the seafood connoisseur.

The exploitation of natural resources follows a capitalist logic, which is so efficient because we as consumers are part of it. Rarely, however, are we aware of the destructive cycles into which we are fitted. In her performative installation Disgusted, but still very hungry , the artist Cristiana Cott Negoescu addresses the far-reaching ecological and social consequences of industrial fishing and fish farming. Using an installative, performatively activated setting of processual interconnected stations, the artist simulates problematic aspects of overfishing, industrialized fishing and fish farming. In her works, Cristiana deals intensively with the systemic flaws of capitalist consumer society. Her performative settings create chains of action that establish a connection between her work and the audience. Through her interactive script, Cristiana's works reveal exemplarily mechanisms of commercial exploitation. In this invisible area, which is nevertheless an integral part of our consumer society, Disgusted, but still very hungry is settled. Larger-than-life fish, played by performers, operate a feed factory where they process their own species. With the simulation of a dinner table at the end of the production process, the boundaries between humans and animals become blurred.

The exhibition is supported by Kulturamt Düsseldorf and Bezirksvetretung 2/Flingern-Düsseldorf. 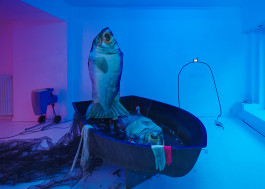 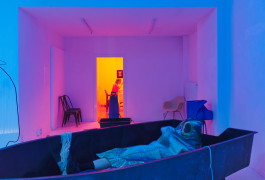 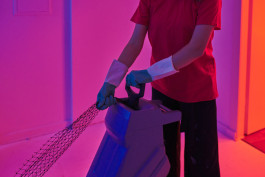 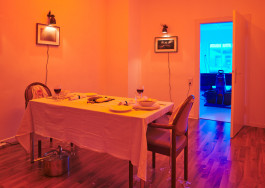 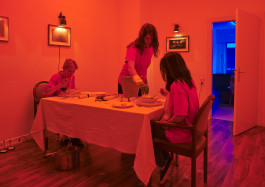 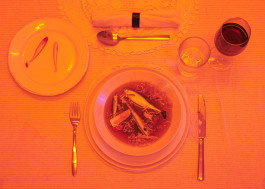