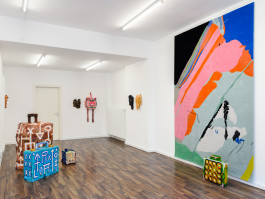 The suitcase objects by Jake Madel are formally based on the bright and oversized logos of the luxury companies. These oversized logos play a decisive role in both rap and influencer culture. The posters of brandnames are a recognition and identity feature.

The desire to use clothing as a design surface of one's own or collective identity and the return to eye-catching slogans is also part of Rike Dröscher's work. Her ceramic works in the form of seemingly carelessly discarded t-shirts symbolize the longing for the unifying element in a weakened community. They illustrate the desire to belong to a mostly loose group in which the logo can be interpreted less as a message, commentary or symbol, but rather as a recognizable symbol. In extreme cases, the group serves as a substitute for family, nation or religion.

Codes from the fashion, graffiti and street art scene are also a fundamental element in Theresa Volpp's works. The trained painter has detached herself from the canvas in her
work and experiments with different surfaces. At the centre of her work is the function of painting in today's visual habit and its aesthetic value, which remains.

The work of Geesche Arning plays with both - materials and creative possibilities. During her graphic design studies in Maastricht, the teachers suggest that she focus on fashion, which takes her to the legendary fashion institute of London's Central Saint Martin. Afterwards, Arning is in Paris at fashion shows selecting the collections, works as a freelance illustrator and as a make-up artist. As a result of all these activities, she has once again become a self-awareness with her drawings, which takes her into the art world with photos, graphics and self-woven carpets. In the exhibition she shows her jewelry objects in dialogue with the works of the exhibition. 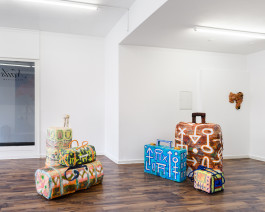 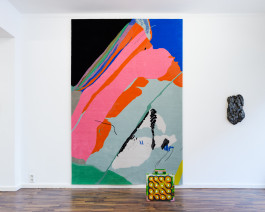 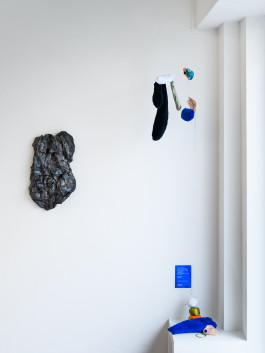 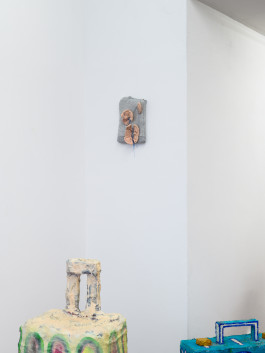